Well...it's been six weeks since Isla's cleft lip repair, so it's safe to say that we've made it to the other side! The first week of recovery wasn't as bad as I was anticipating, but that could have also been because she was pretty heavily sedated for the first five days so all she did was sleep like a newborn again. I'm still amazed at the work our surgeon, Dr. Amanda Gosman, did down at Rady's Children's hospital. 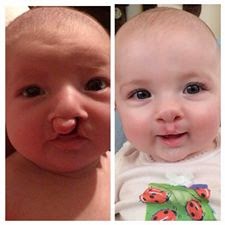 We now have our official palate surgery date...August 7th! Yikes. I'm definitely not looking forward to that one, but that should be our last surgery for a good 3-4 years. So we're ALMOST in the clear...for a little while at least.

Since Isla's lip repair I've been working on a new website, www.cleftopedia.com, with another cleft mommy. Before I get into the website, I want to tell you a little about her. Her name is Danielle Zierer and  met her through a cleft support forum on facebook. We have so much in common that I call her my East Coast twin. And when I say we have stuff in common...it's almost freaky. We both have two kids...both the same age, with our youngests (Isla and Will) being only 5 days apart born with the same exact cleft. Our birthing stories are pretty much identical with both of our kids. Our husbands look alike, and have the same interests. Both Danielle and I were considering moving to Tennessee until we found out we were pregnant. The list can go on and on, but one of the biggest things that we had in common was the troubles we went through when we first found out that our little ones were going to be born with a cleft lip and palate.

Don't get me wrong, there are a ton of resources out there for AFTER you have your baby, but there wasn't anything for soon to be mommies of cleft baby. The amount of research that the both of us had to do was so overwhelming that it took us the remainder of pregnancies to get a, somewhat, good grasp on what direction we were going to go with our babies. (If you've been following along with my blog, I wrote all about the headaches and stresses of trying to narrow down a cleft team in my post from June 2013 titled "Future Plans".)

One day Danielle and I got to talking and decided we wanted to do something that would help future moms in our position, and that's when the idea of Cleftopedia was born. It was originally going to start out as a document that we were going to post onto the Facebook support group, but there was just too much information so it transformed into a full website.

The best thing about Cleftopedia is it wasn't just put together by the two of us...it's been put together with the help of over 200 other cleft families AND growing! Now when a new mommy is searching for a cleft team in their area, they will be able to see what pre-surgical techniques each surgeon does, hear real reviews from real moms, and even be able to see before and after pics.  All I know is...if I found this site while I was pregnant with Isla, I would have been one happy camper! So I hope that Cleftopedia will be able to do that for any new cleft mommy that stumbles across it.