We're officially on the road to repair!

While doing all of our research before Isla got here, we decided on a pre-surgical technique called a Nasoaveolar Molding Device (NAM), should her cleft be complete and affecting the nose...which it is. What this device does is pull her midgumline back in line with the rest of her jaw and it will also help shape her nose. This is going to hopefully reduce 2-3 surgeries down the road as well as reduce the possibility of bone graft on her gum line by 60%. So, to us...the NAM was a no brainer. It's more work on our end, but what's 3 months of work for your baby to help prevent them from all the pain that they will endure with all the additional surgeries down the road?

Below is a picture of what the NAM will be doing for Isla. Before the NAM, that piece that looks like it hangs off the nose is actually attached to the tip of the nose. So unlike you or me...Isla doesn't have the cartilage in between her nostrils to create a point of the nose. Without the NAM, the repair would make it seem as if her nose was flat, but as you can see from the picture below...the NAM really does wonders for the nose.

The alternative is to let the nose do what it wants and then wait until she's 4 or 5 in order for her to have her first nose job.

﻿
Because she is so small and growing so rapidly, this process is only going to take 3 months! Every week we have to go in to see the orthodontist and he adjusts the NAM (which looks just like a retainer that most of wore...there's just no teeth for it to attach to and that's why we have to tape to her face). After the 6th to 8th visit her gumline should be fully aligned with the rest of her jaw and that is when they will put the nose stints in and also begin taping the upper lip to down to elongate it. This process is supposed to only take 4 weeks! So, up until her first surgery, which will be sometime in January/February she will be sporting this look. 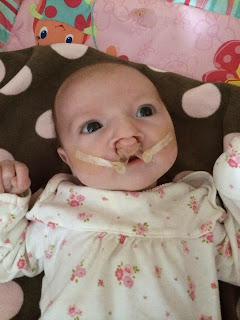 Insurance will be the death of me

It's no wonder that our country is in the financial state that it's in. I've spent the last two weeks on the phone with our insurance company trying to iron everything out for Isla's care, just to come to the realization that everyone that is on Medical (or state payed insurance) are the people that are getting the care that they really want.

Isla is three weeks old today and as of yesterday she finally saw her cleft team. Not sure if you remember, but back when I was pregnant we decided on going to CHLA...well, not anymore. We will now be going to Rady's Childrens and I couldn't be happier about that, but it still doesn't mean that I am happy with our Insurance company!

When I was first researching cleft teams, we spoke with a nurse at CHLA that strongly advised me to go with an HMO because it was going to save us a TON of money. I remember specifically asking her if  it was going to be hard to get a referral over to them for the treatment of our daughter, and she assured me that no one ever gets denied. I then looked into the numbers, and she was right! It was going to save of thousands of dollars by going with an HMO rather than a PPO, so that's what we elected to do.

This has been the BIGGEST nightmare of my life so far! Here's a little peak into what my life has been like...

The thing that really gets me is...We pay for our insurance, we work, we pay our taxes, we don't ask for handouts, but yet we're treated as if we are second class citizens when it comes to getting the right health care. Now, if I was on Medicare and getting our insurance for free from the state, then we could go wherever we would want to go, with no red tape whatsoever. Doesn't that sound a little ass backwards?? You would think that the working class...the people that are actually paying for these services... would be the ones that would get the perks to go wherever they would like to go. Instead, the people that are sitting there with their hand out and ass on the couch are the ones with more rights than us. Now that's some motivation to get to work and be a contributing member of society...NOT.
Posted by Dara at 11:01 AM No comments:

In my last post, I left off where we were waiting on the sleep study results, so I'll start there. The results came back in on Wednesday and  they were good...no obstructive apnea! However...they were still going to send us home with an apnea monitor. Apparently all babies are born with a slight case of central apnea, so during the test she held her breath for a period of 13 seconds...which is enough for insurances to send us home with this handy dandy machine that will let us know when and if Isla stops breathing for more than 19 seconds and also if her heartbeat raises too high or goes too low. Sounds like a parents dream come true right? No getting up every hour in a panic, just to "check' if your babies breathing (all you moms know what I'm talking about).  WRONG! Let me introduce you to nightmare number one... 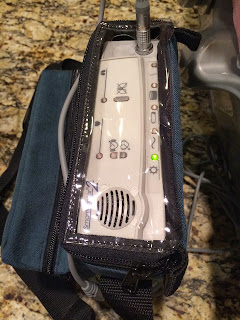 The Apnea Monitor
They should have prescribed a case (yes a case...a bottle wouldn't be enough) of Xanax with this because all it is, is an anxiety builder. The thing goes off...alot! But not because Isla isn't breathing, but because of machine error. So, instead of waking up on my own to make sure she's breathing, I'm being woken by this machine (that sounds just like a smoke alarm going off) to let me know she's not breathing or her hearts not beating. Talk about PANIC! But everything has been just fine with Isla, and this machine might find a new home out in the garage very soon.
Besides the Apnea Monitor, Isla is a very easy baby overall. We've had her  home for a little over a week now and there have been no issues. She eats like a champ and sleeps like a baby. She's up over her birth weight and right on track to have her weight were it needs to be for her first surgery around 3 months  of age.
Now, the next step is to get her into seeing her cleft team...which has been a whole different obstacle because of HMO bullshit. But hopefully we will have something figured out this week, and on the road to repair.
﻿
﻿