Stage two of the NAM

Sorry it's been some time since I've posted anything, but I've been (im)patiently waiting for stage two of the NAM so that I can post Isla's progress...and here we are!! Finally we are working on her nose.  I'm not too sure she's as happy about it as I am...even though she looks pretty happy here. 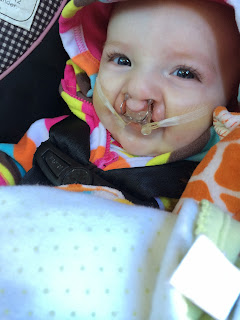 When we first started the NAM, the piece below her nose (premaxilla) was 11mm away from the rest of her jaw line. It is now only 3mm and perfectly centered! I'm amazed at how far the NAM has brought us thus far. 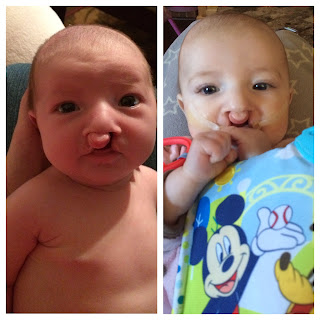 Now that her premaxilla is 3mm from her jaw, they can finally add the nose stints. This is going to help elongate Isla's columella (the piece of skin between the nostrils). Right now, it's only about 1mm long and without the NAM, having surgery now would give her a smashed/flat looking nose....which is not what we want because that just means more surgeries down the road to correct that aspect of her nose. Our goal is to minimize as many surgeries as possible. With only 5 weeks left before surgery, I'm hopeful that this is going to get accomplished, but fearful that 5 weeks might not be enough time...either way, I'm putting all my faith in our cleft team since they are the experts at this. Surgery is set for January 28th, it's going to be here before we know it! Eeeek.