I know it's been a while since we last posted, but that doesn't mean we haven't been busy...we've just been waiting to be able to post something worth while.

Since we've decided on a cleft team, we've been spending the last month trying to get a good 4-D picture of Isla with a DVD so that she could have a keepsake when she got older. Ok, ok, we also wanted to get another glimpse of her before she came into the world too. But, since Gemma has a DVD with a gazillion beautiful in-utero pictures, we wanted to be able to do the same thing for Isla.

Easier said than done!! We've learned that the reason so many parents don't know that they are going to be giving birth to a baby with a cleft is because they tend to hide their face...as if they already know something is different about them.

Today marks the FOURTH time in a month that we have gone to get her 4-D ultrasound pictures done. (I know, I know...we've already gotten a bunch, but they say that between 28-32 weeks is the best time to do these because they have more body fat and look more like they will at birth). We were determined to get a good shot, but Isla had other plans...she was determined to NOT let us see her.

First her hand was in her face the whole time, the second time her hand and umbilical chord were in the way, the third time she was pressed all the way up against my uterine wall. This time, she cooperated! Yay!! Although now she's running out of room in there, we were still able to get a few good shots. They were even able to peek up into her palate and it "seems" as if it were in tact. (Not going to get my hopes up...but it really did look that way in the ultrasound). And from the looks of it...it seems that she might be incomplete on the left and complete on the right...or even incomplete on both sides because there is not large gap that you can see. 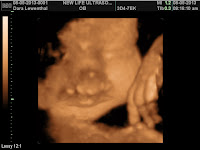 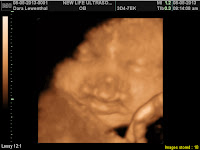 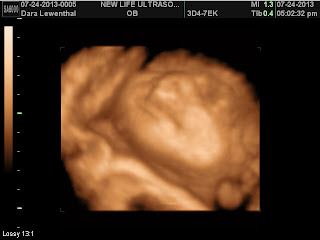 If I were to guess...I would say that Isla will be born looking very close to one of these babies.... 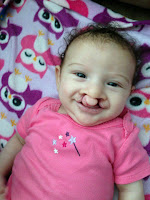