Deciding on a Team

It's so crazy how just one little piece of information can have you view life completely differently. For a while there people starting looking different to me. I no longer noticed what color eyes they had, the color of their hair, or even what they were wearing because all I was looking at was their upper lips. I was determined to run into someone that was born with a cleft. Not that easy. Imagine standing in a clover field and looking for that one four leaf clover...that's what I felt like. It took about two weeks of this for me to finally realize that I will most likely never find what I'm looking for. Not because it doesn't exist, but because the lip was corrected so long ago that chances are I wouldn't be able to tell, even if I was looking right at it.

So while wandering around that clover patch for weeks, I realized that although Isla is going to be born a four leaf clover,  over time she is going to end up looking just like all the other three leaf clovers. And 20 years from now, when a new mom is in my shoes (looking for that lucky four leaf clover), Isla will most likely walk right past her and that new mom will never even know how close she was to finding that rare, miracle.

So knowing all that now, it was time to make the decision on how to get her to that point. Our main goal is to achieve that three leaf clover look with the minimal amount of surgeries and the only way to do that is to find a really great surgeon and team to guide us through this journey.

Since my last post, we have met with the two local(ish) hospitals, Rady's in San Diego and Children's LA. Both hospitals had their strong points, but of course we could only choose one. So I'll sum up the pro's from each hospital first...


We liked the idea that the hospital was only an hour away and I personally LOVED the fact that it's located in San Diego...my most favorite city of all time (+).  We were really interested in a particular surgeon down there, but during the meeting we found out that he is no longer doing clefts and focusing more on his private practice and that a new surgeon has taken his place. Now, while I'm sure this new surgeon is great (Rady's wouldn't hire someone that was unqualified), it still scared us because there are no long term studies of her work (-).
After leaving the meeting, we didn't have that warm fuzzy feeling we were expecting to receive, but we were still keeping an open mind. There are so many emotions wrapped up in this decision that perhaps a warm fuzzy feeling was just not going come with this one...

As we were driving up there, both Randy and I were already cursing the traffic. Not a good sign, since most likely one of us will be having to make the drive once a week for the first two months if Isla is going to need to use the NAM (-). We arrived two and half hours after we left the house...alot different of a commute than to Rady's. So there was one negative for LA and one positive for Rady's.
As we entered the class that they were holding for "new parents of cleft babies", both of the ladies (one a nurse and the other a psychologist) greeted us and we immediately felt extremely comfortable with them (+). During the course of the class, we learned  a lot about the hospital... they are ranked in the top 5 in the country (+), three of their five surgeons hold a double doctrine...they are MD & DDS (+), they have a rough timeline as to when the begin correcting the cleft but each child is treated as an individual (+).

Come to think of it...I can't recall one negative from the meeting with Children's LA (except for the commute of course). So the decision was unanimous and with no discussion...the winner is Children's LA. Both, Randy and I knew as we were walking out of there, that this was the place! And that warm fuzzy feeling did come with this decision :) 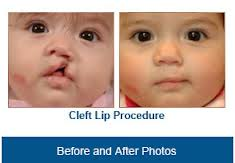 We have decided to go with Dr. Mark Urata out of Children's LA and we couldn't be happier and more comfortable with our decision. Although we have heard his bedside manner is not the greatest, his work is absolutely amazing! And from the before and after pictures of his children...the symmetry is so unbelievably perfect that there is no way to even tell that they were born with a cleft.

So now we wait...just like all the other expecting parents out there.
Posted by Dara at 9:13 AM