Every mothers worst nightmare is hearing the words..."there is something wrong with your child". And it doesn't make the blow any less painful, when they are talking about your unborn child...a child who you have yet to meet. Well as of May 29, 2013 this nightmare is now our reality and this blog is going to document our journey. I'm hopeful that everything is going to turn out just fine, and I'm hoping that this blog will one day become encouragement for anyone else that may have to go through what we are about to....


On May 28th, we went in for our routine ultrasound. I'm 22 weeks pregnant...just about to turn the corner to 23 (yes...every day counts when you're pregnant...it's the ultimate countdown). This is my second child and there were  no issues with the first and up until this point, there has been absolutely nothing wrong with this pregnancy...it's actually been easier than first. So the ultrasound appointment was more of excitement to make sure that our baby was still a girl...and she was! At the end of the appointment, the technician wanted us to come back in to speak with doctor so that he could review everything and determine if we needed further care. Not once did she mention that there could be complications, so I figured this was just something routine that this doctors office did just so that they could collect more money from one more unnecessary visit. I made the appointment for the next day, before work just to get it out of the way.

It's the morning of the 29th and I'm getting ready to leave the house. I didn't see a need to drag my fiance all the way to the doctors at 7am just for them to say, "everything looks great, have a good day", so I just went and even brought my 19 month old daughter with me since it was on the way to her day care. When we got into the exam room and laid on the table, I was excited again to see our new daughter (I'll take every glimpse I can get)...the doctor lubed up my stomach and started the ultrasound. Gemma, my daughter, yelled out BABY when her new little sister came on the screen. I told her that was Isla, her baby sister...she then kept saying "hi Isla, hi Isla". All in all a very joyous visit...until....

The doctor zoomed in on her face and then asked one of the nurses to hold Gemma. At first I just thought it was because she kept bumping me and it was disrupting his exam, but as soon as the nurse grabbed her, he stopped, looked at me and said..."did our technician tell you what our concern was yesterday?" I thought...concern ??? WTF do you mean, I thought this was just a routine visit. I responded with a confused, "no". My heart sunk when the words "we believe your daughter has a cleft lip and possibly a cleft palate".

He continued speaking, but I don't really know or remember what he said after that. I was in complete shock. All I was thinking was, how could this be happening?? Is this for real?? I came out of my shocked daze when he asked me if I "wanted to do the amniocentesis now, or wait." I looked at him and said "what, why would I need that" and he said "it's because we need to rule out any other chromosomal disorders that are associated with cleft."

Now my head was spinning and I really felt like I was in the twilight zone. Not only is my daughter going to have a deformity (which is can be fixed, thank God), but there might be something else wrong?? Of course I agreed to do the amniocentesis right there, I mean...why wait?? The results are already going to take 2+ weeks to get back, why add anything more to that excruciating two week waiting period.

They pulled out a needle the size of my forearm and jabbed it right in my stomach, I didn't feel much until they started extracting the amniotic fluid and then I felt extreme pressure and immense pain. I think at that moment, reality set in and I jumped out of my confused daze because I just started crying. Maybe it was the pain that made me snap back into it, who knows. But I was flooded with a gazillion thoughts. At first I blamed myself, I thought what could I have done to prevent this? I've missed a few days of my multi-vitamin...could that have been the cause? I sometimes have a cup of coffee...could it be the caffeine that caused it?? Could it have been from my smoking prior to finding out I was pregnant? Or the drinking I did when we were in Costa Rica (which is when she was conceived).  All I could think of during that amnio procedure was how horrible of a person I was to have caused this to my unborn baby...and now I have to pay the ultimate price.

Once the doctor finished the procedure (which only took less than a minute, but still felt as if a whole day had passed by during that time), he also informed me that they heard a slight irregularity in heart beat so we need to schedule an echo ultrasound to get a more in depth look.

Nothing like dragging out the pain and slowly driving that knife into your heart...why not just tell me everything at once?? Why did he have to drag everything out?? At that point I was speechless, I had no words...which is unusual for me. I finished the appointment in almost a zombie like state, got my next appointment for a month out, and I should hopefully hear something in two weeks. But for now, I needed to rush over to my OBGYN and get my rhogam shot, so I didn't start building up antibodies against my unborn child since I'm RH-.

Whoa...definitely not the "routine" visit that expected when I went.

I got in the car and immediately Google "cleft lip/palate"...BIG MISTAKE. They show the absolute worst of the worst pics on there and I had a meltdown. I immediately scheduled an appointment at the 4D ultrasound place we have in town, so I could see for my self just how bad it was. From what we saw on the screen...it really wasn't too bad. 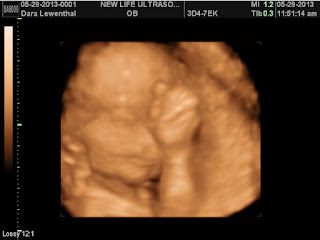 You can see a little slit above the lip, but at least her lips look as if they are in tacked...so possibly we're looking at only a unilateral cleft...a maybe just a partial. Either way...she still looks absolutely adorable to me, and I can't wait to meet her. Seeing this definitely put some of my worries at ease, and seeing her made me know that everything is going to be just fine. I don't believe there is any way that anything else could be wrong with her...but all I can do at this point is wait, and pray...
Posted by Dara at 5:30 PM